Ruth on the Issues 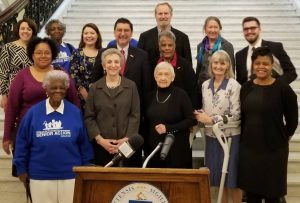 When the global pandemic hit Massachusetts, Representative Balser was serving as the House Chair of the Joint Committee on Elder Affairs. Her role as an advocate for seniors, took on even greater meaning in the era of COVID-19, a cruel virus primarily targeting seniors.  With the tragedy unfolding in the Soldiers Homes and nursing homes and assisted living residences, Representative  Balser held oversight hearings to hold the Administration accountable for policies for older adults. Representative Balser advocated vigorously that seniors and especially those in long term care facilities get the testing and the resources that were needed for them and for those who care for them.  Legislation that she filed,  requiring accurate and timely reporting of positive cases and deaths in senior facilities, as signed into law by Governor Baker and is now Chapter 93 of the Acts of 2020.

This session, Representative Balser has filed bills to make sure that elder facilities have sufficient access to Personal Protective Equipment (PPE) and staffing to improve the quality of care. 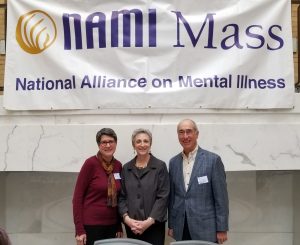 Rep Balser with NAMI advocacy chair and board member on NAMI Advocacy Day at the State House.

Representative Balser leads efforts to expand access to treatment for mental illness and addictions, and support services for the disabled.  She is responsible for passage of many bills that protect consumers of behavioral health services including landmark mental health parity and children’s mental health legislation.  She is additionally credited with protecting behavioral health in Massachusetts health reform efforts.

Continuing to be a champion for mental health parity, Rep. Balser has filed legislation that will make sure that Massachusetts complies with all the parity requirements in federal law.  She has also advocated for the adoption of mental health parity concepts in disability insurance, as well as health insurance. 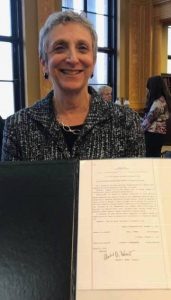 A top priority for Representative Balser has been women’s equality.  Her legislation to prohibit discriminatory practices against women in the pricing of annuity policies and disability policies have both become law.  (The first of these two was signed by Governor Patrick in 2008; the second by Governor Baker in 2019.)  Additionally, she cosponsored pay equity legislation and the ROE Act, which protected and expanded women’s access to abortion, both of which are now law.

“Separate but equal is not a part of civil rights, it is a violation of civil rights,” Balser said near the beginning of one of the most thoughtfully constructed and argumentative speeches of the day. She pierced the argument that marriage has been hetero for millenia with the magnificent observation that “we have a historic opportunity to expand our definition of love and marriage.” She read from an American Psychological Association report to refute arguments that same-sex marriage is bad for children. She spoke of other movements for equality that had faced opposition. In scope, language, and passionate delivery, Balser’s speech may have been the best of the day.

Representative Balser continues to fight for equal rights for the LGBT community. She co-sponsored the legislation that granted equal rights to transgender individuals, signed into law by Governor Patrick. The following term, she cosponsored the legislation that extended the protections to trangender individuals to public accommodations, signed by Governor Baker.

Representative Balser is committed to ensuring that all immigrants have the same equal rights protections as all other residents of the Commonwealth.  This session she is the lead House sponsor of An Act to protect the civil rights and safety of all Massachusetts residents, also known as the “Safe Communities Act”,  legislation that will protect the due process rights of all the people who reside in Massachusetts.

Advocate for the Environment 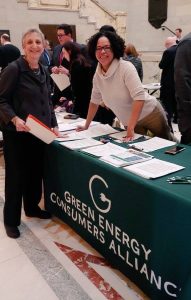 Rep. Balser has been recognized for her efforts with awards from the Newton Conservators and the Environmental League of Massachusetts and has earned a 100% rating from the Massachusetts Audubon Society.

Locally she has spearheaded efforts to protect Hammond Pond, Hemlock Gorge, Crystal Lake and the Chestnut Hill Waterworks. Concerned with the protection of land across Massachusetts, she is the lead House sponsor for the Public Lands Preservation Act. 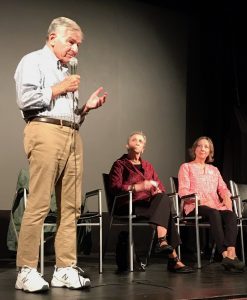 Along with former Governor Michael Dukakis, and Diane Turco of Cape Downwinders, Rep. Balser spoke on a panel about the risks related to nuclear power plants.

Rep. Balser has made public safety and public health a top priority for many years.   As a Newton Alderman, she chaired the Public Safety & Transportation Committee.  As a State Representative, she became a champion for  fire safety in response to the  tragedy in 2000 when a building on Boylston Street in Newton burned and 5 people died.  Her legislation that strengthened the state’s requirements for automatic sprinkler systems in non-residential buildings was signed into law in 2008. In recent years, she has advocated for expanding sprinkler requirements in homes.

Recognizing the continuing risks related to nuclear power, Rep. Balser has filed legislation that would ensure that MEMA and DPH provide relevant information and take necessary preparatory steps in the event of an emergency at a nuclear power plant, taking into account the lessons learned from the Fukushima disaster.

Additionally, Rep Balser has filed legislation to expand the training of restaurant personnel to respond to choking, and one that would establish a commission to consider the health impacts of sugar and salt in food served in restaurants and public spaces.